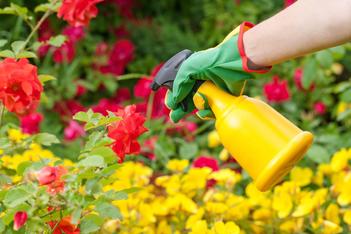 Wood  vinegar  has  been  widely  used  as  pesticide based  on old traditions and knowledge of users and local producers. Pyroligneous  acid,  also  called  wood  vinegar  or  moku-saku,  is  an  aqueous  liquid  produced  from  slow  pyrolysis  of  hardwood. Wood vinegar has been widely used to repel insects from plants and households in Thailand and it is easy to find pyro ligneous products  marketed  on  the  Internet  as  an  insect  repellent. Archeological studies have found that pyrolysis liquids were already used in the time of the Neanderthal. Wood vinegar and other slow pyrolysis liquids are produced as a by-product of charcoal production. However, future business ideas  may  be  the  other  way  round  as  pyrolysis  liquids including wood vinegar  may  replace  synthetic  chemicals  in  the  form  of  pesticides  and  biocides.

Directives and regulations related to the sustainable use of pesticides govern and direct plant protection strategies towards a lower use of synthetic chemicals. It is hoped that many mega trends of global policies will boost the use of plant based products given that a reduced reliance on fossil fuel is a general target in the global food and feed production economy.

Wood Vinegar and Pyrolysis technology has been actively studied and developed around the world and is linked to the development of the knowledge based  bio-economy.  The  importance  and  social  impact  of  pyrolysis  technologies  will  also  be  enhanced  because  it  is  a  practicable  technique  in  the  sustainable  use  of  wastes  and  biomasse.

Globally  changing  pesticide  policies  and  integrated  pest  management  programs  (IPM)  aim  to  reduce  pesticide  risks  on  the  environment  and  human  health.  It  has  been  clearly  stated  that  the  hazards  to  health  and  the  environment  from  the use of pesticides must be minimized and dependence on chemical control needs to be reduced. In Europe, a thematic strategy  on  the  sustainable  use  of  pesticides  was  adopted  in  2006  by  the  European  Commission and  as  such,  a  new  directive was put into force in 2009. Replacement of synthetic  chemicals  with  alternative  plant  protection  technique  has  been  mentioned  in  numerous  policy  documents  related to the use of pesticides. The  highest  demand  on  natural  pesticides  is  in  the  organic farming where synthetic chemicals cannot be used for plant  protection.  In  Europe,  replacement  of  chemicals  with biological control agents has been slow but in Asia and the  USA,  botanical  pesticides  have  already  been  placed  on  the  market  as  green  chemicals.

Globally, the  need  to  minimize  the  environmental  risks  resulting  from pesticides leaching to ground water and waterways has bolstered the use of wood vinegar as a biocide and pesticide

Wood vinegar has been widely used to repel insects from plants and households in Thailand and it is easy to find pyro ligneous products  marketed  on  the  Internet  as  an  insect  repellent. Strong  in 1973 reported good  results  when  wheat  seed  were  treated  with  hardwood  tar  oil  to  repel  birds,  rodents  and  insects.  Hardwood  oil  was  also  found  to  be  toxic  to  all  the  tested  insects.  Very  similar  effects  were  found  when  pyroligneous  acid  was  used  for  controlling  insects  from  sweet  corn  plots. Other  studies  have  concluded that wood vinegar in organic farming can have a variety  of  applications,  including  pest  control,  improving  soil  fertility,  and  plant  growth  promoter  or  inhibitor.  The wood vinegar based pesticide market is very progressive in  Japan  and  in  numerous  other  Asian  countries  such  as  Thailand, Cambodia, and China. In  the  USA,  vinegar  has  been  listed  as  a  minimum  risk  pesticide  but  not  wood  vinegar.US wood vinegars producers are New Life Wood Vinegar and Verdilife USA.