About Wood Vinegar - what is wood vinegar?

How Wood Vinegar is Made

Organic biomass material is heated in an oxygen reduced environment leading to the thermal decomposition of materials and release of gases (called pyrolysis) – this exhaust smoke is condensed (cooled) into a liquid. The condensate then further separates and refined into Tar, Wood Vinegar and Bio-Oil. Production equipment can vary from basic metal drums or in ground fire pits covered in clay mud with cooled bamboo chimneys to state of the art industrial processors that are completely controlled continuous biomass converters.

Wood Vinegar has a long history of successful use throughout Asia for a replacement of expensive fossil derived agricultural chemicals. There is evidence of use dating back thousands of years to the Amazon basin black terra preta earth – in the 1800 and 1900’s there was substantial factories that commercially produced wood vinegar with creosote as a source of acetic acid. Japan and throughout Asia has used it extensively for several decades for all sorts of uses and replacement of synthetic agrichemicals. 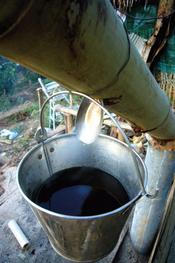 Wood Vinegar, also called Pyroligneous acid, Liquid Smoke or Mokusaku, is a dark liquid produced through the natural act of carbonization, which occurs when a biomass is heated in an airless container during charcoal/biochar production. The exhaust smoke from this charcoal production is condensed (cooled) into a liquid. This condensate then further separates into Tar, Vinegar and Bio-Oil.

Wood vinegar has a low PH of around 3 and contains more than 200 of organic compounds: the major components aside from water include acetic acid, methanol, ester, acetals, ketone, formic acid and many others. It is proposed that instead of the specific effectiveness of a certain element, in the case of wood vinegar, various elements work synergistically for a greater outcome. The composition and properties of wood vinegar depend on feed source materials as well as the method (time/temperature) of pyrolysis.